Above: Kourosh and his team of researchers that comprise the Computational & Theoretical Multiphysics Laboratory (CTML)

AME is very excited to now house the Computational and Theoretical Multiphysics Laboratory (CTML) of Dr. Kourosh Shoele! Kourosh has been very busy lately, applying mathematical and computational tools to assist in the missions of the center. Recently, he was awarded a CFD (Computational Fluid Dynamics) project related to the transport of cryogenic fluids from NASA. The model and the tools developed by this project will be integrated with NASA's design and development software packages.

Additionally, he is a recent recipient of the National Science Foundation's CAREER award, entitled "Multiscale Turbulent Flow Interaction with Flexible Branched Trees for Storm Impact Research." The Faculty Early Career Development (CAREER) Program is a Foundation-wide activity that offers the National Science Foundation's most prestigious awards in support of early-career faculty who have the potential to serve as academic role models in research and education and to lead advances in the mission of their department or organization. Activities pursued by early-career faculty should build a firm foundation for a lifetime of leadership in integrating education and research.

Kourosh has also been collaborating across the center, as exemplified by his recent sub-award from Vanderbilt University. Dr. Shoele and Dr. Jonathan Clark were recently awarded nearly a half million dollars to study "Model-Based Design and Control of Power-Dense Soft Hydraulic Robots for Demanding and Uncertain Environments," a project that originally was awarded to Vanderbilt by the National Science Foundation.

If you see Kourosh around the center, give him a pat on the back. He's earned it! 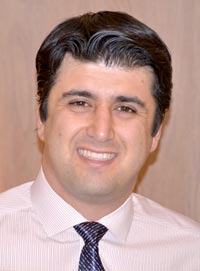 Research Themes: Dr. Shoele and his group are studying problems at the interface between mechanics and physics through developing and applying mathematical and computational tools with a focus on fluid-structure interaction, renewable energies, biolocomotion, and biomechanics.